Can a Ricoh GR1 film camera be repaired?

Failure of the GR1 is like a chronic illness, and now, more than 20 years after its release, it is almost impossible to use the GR1 in a fully working condition due to the lack of durability of its parts.

I honestly think the GR1 is more fragile than other high-end compact cameras.

However, I have been using this camera for over 10 years and intend to continue to use it in the future, so I would like to see how it responds to malfunctions and how repairs are received.

The LCD display is the number one failure rate for GR1. This part seems to have a limited life span, so even if the LCD is displayed, it almost certainly will not be displayed after some time of use.

If this is a physical failure of a part, there are no stores in Japan that can currently repair it.

I also consulted several stores that might be able to repair it, but they said it was impossible because they did not have the parts.

Also, there are two causes of LCD failure: the LCD base and the main base, and if the LCD base has defective contacts, repair seems to be possible.

This person repaired the LCD by rewelding existing parts.

Many people overseas are also suffering from similar malfunctions, and we found a website with detailed repair instructions.

However, the degree of difficulty of repair is said to be reasonably high, so it would be difficult without some knowledge of mechanical systems.

Even if the LCD does not working, the camera is still usable.

There is no way to control the film counter, but the shooting mode can be known by the camera’s focus action and viewfinder information.

The following are the methods for determining the shooting mode other than LCD.

Normal shooting: Focus moves. In the viewfinder, depending on the distance of the object, either a person or a mountain symbol will appear.

Distant view mode: Focus is fixed. The mountain symbol appears in the information in the viewfinder.

Single Auto Focus: The focus moves. In the viewfinder, depending on the distance of the object, either a person or a mountain symbol is displayed.

If all the information in the viewfinder were also faulty, it would be impossible to discern, but I think at least one of them would be displayed, so we should remember that the next mode after focus fixation is autofocusing.

Even if all viewfinder information is also faulty, there will be no major problems if the focus is set to a working mode.

This is because the difference between the two shooting modes in which the autofocus works is the metering method: center-weighted metering for “single autofocus” and average metering for “normal shooting.

However, the GR1’s center-weighted metering seems to have a relatively wide metering range, so there is not much difference in normal shooting situations with negative film.

This is more of a maintenance rather than a breakdown, but you can buy a malt from amazon or other places and put it on and you are done.

Originally, a hole was drilled in the center so you could see what film is in the film from the outside, but I only use PORTA, so I leave it windowless.

Thus, it is not visible from the outside, but there is no problem.

However, nowadays they sell malts that have been die-cut, so you can buy those.

I think this is another failure that will surely come with some use. I also own two GR1’s that have failed shutters.

One unit will shutter, but the shutter curtain will not actuate and no picture will be taken. The other unit will not autofocus focus and the lens will remain in motion.

Similarly, I don’t think there are any stores in Japan that can handle this repair. I think it can be fixed because the shutter cable parts are sold, but without other related parts, it is out, so they may not accept it. 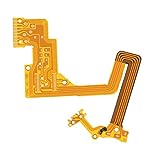 Although these are overseas sites, I have posted links to “e-bay” and “Japan Camera Hunter” as they seem to be able to repair them.

e-bay seems to change its URL, so if it does not link, please search for the following keywords.

Should I fix the shutter failure?

If shutter failure is the end of life, it would be better to have the shutter fixed for a longer period of time than to buy used equipment whose condition cannot be ascertained.

If the e-bay store can repair it, it will cost about 20,000 yen including shipping. There is a possibility that they may not be able to repair it, but if the GR1s I have fail, I would like to send all three of them out together.

Knowing that it could not be fixed, I removed the cover to know what level of repair it would be.

I just removed the top, but my impression is that the LCD might be able to do it if I re-fuse it myself.

The lens part could not be reached by removing the cover for the parts, and I gave up immediately because many parts had to be removed.

Opening the top was relatively easy, and I was able to remove it by unscrewing the screw on the top of the film roll and forcibly peeling off the adhesive on the leather part. However, I pulled it off thinking it might break, so I do not recommend it to those who do not need it.

This part is designed to be hooked, so be careful who removes it.

Also, please note that the construction seems to differ slightly from model to model.

On the bottom, just remove the screws. If there is a winding defect, some of them may be fixed by cleaning here.

Also, I removed the battery and worked on it, but there was still electricity and I got “electric shock -> scream”, so please enjoy the disassembly with proper work procedures.

GR1 repair is a refugee in Japan.

The only high-end compact camera that can be repaired is Contax-related (Suwa Camera).

For other cameras, it seems that the only way is to look for information on the English website, where repair requests are collected from all over the world.

Leica’s Mini Lux, for example, is also accepted on some international sites. the GR1 is relatively inexpensive for a high-end compact camera, and there are quite a few in good condition, but I feel it’s best to get it repaired as soon as possible.

Today, I felt a sense of mission that I had to request overseas repair work as a human resource.

▼ The camera was repaired at a camera repair shop in Taiwan, please see the sequel.